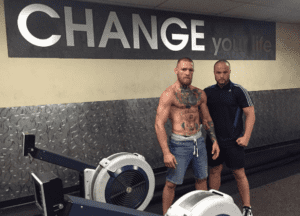 Have you seen a Conor McGregor rowing machine workout on “The Mac Life” or “UFC Embedded”?

Are you wondering why McGregor and other UFC stars are starting to incorporate rowing into their training regime?

Rowing machines provide a ton of full-body benefits that transfer well into fighting inside the Octagon.

Whether it’s the benefits of a full body workout, losing weight, cardio improvements, or being low-impact, a rowing machine is one piece of fitness equipment all MMA athletes should use.

In this article I breakdown why Conor McGregor uses a rowing machine, how he incorporates it into his training, and the top rowing machine benefits for MMA fighters.

Why Did Conor McGregor Start Rowing?

After suffering a defeat to Nate Diaz at UFC 196, Conor McGregor went back to the drawing board to correct his mistakes and avenge his loss.

“I wasn’t efficient with my energy” is one mistake he admitted to making in his UFC 196 post fight interview.

He later commented how “the contest was going very easily for me but midway through the second round, my gas tank emptied and I could not clear the lactate in my body. I began to drown in the middle of the Octagon. I eventually succumbed to defeat.” 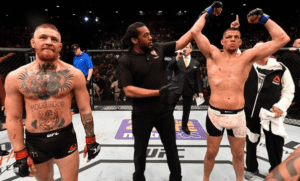 McGregor admitted that prior to UFC 196 he was too focused on other aspects of MMA and not focused enough on cardio. If he was going to fight up a weight class, he needed to add muscle while still maintaining his stamina.

To do this, he hired Julian Dalby, an exercise physiologist, former Irish Olympic cyclist, and world record holder in dead lifting.

Dalby knew McGregor needed to increase his cardio with a focus on increasing VO2 max and lactic acid threshold. This was the beginning of the Conor McGregor rowing machine journey.

The first step was to create a plan that took an analytical approach to increasing VO2 max and lactic acid threshold.

McGregor needed to do a series of anaerobic and aerobic training exercises, while constantly monitoring heart rate and performance.

McGregor also did sprints on a treadmill but commented that running on the road was too stressful on his joints and bad for his body. He enjoyed the high intensity and low impact aspects of rowing and biking.

Just 6 months after their first fight, McGregor would rematch Diaz at UFC 202 in Las Vegas, Nevada.

After a tough camp focused on increasing cardio with the bike and rowing machine, Dalby stated “I can tell you Conor is in the best shape he’s ever been in.”

While McGregor was in the best shape of his life, Diaz would not be defeated easily. The fight turned out to be one of the best “wars” in UFC history.

In-between rounds, you could hear McGregor’s coach (John Kavanagh) say, “this is the last few rounds on the rower!”

Kavanagh knew the rounds Conor McGregor did on the rowing machine would remind him how hard he worked to get to this moment and help him fight to the final bell.

In the end, the rowing machine and bike proved to pay off, as Conor McGregor won by majority decision in a 5 round (25 minute) showdown. 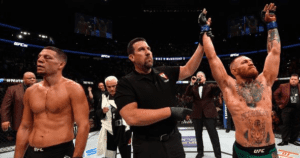 But what rowing machine is Conor McGregor talking about?

He’s referring to the best training rowing machine on the market, the Concept2 Model D.

The Concept2 Model D Rowing Machine is the #1 bestselling rower used by professional athletes around the world. It is the top rowing machine brand used by Olympic rowers while performing “off water” training and the chosen rowing machine of Crossfit.

You can read more about the Concept2 Model D in my full Concept2 Rowing Machine review.

Conor McGregor swears by the Concept2 Rower so much that he lists it as a requirement in his “Mac Life F.A.S.T. Program”. A conditioning program that guarantees maximum performance after a 12-week guided course.

Below is a video describing the “F.A.S.T. Program” and a short Conor McGregor rowing machine clip.

Other fighters such as Anderson “Spider” Silva, Khabib Nurmagomedov, and Anthony “Rumble” Johnson have even been seen rowing on a Concept2 Rowing Machine.

As a fan of the UFC and rowing machines, it was nice two see two high level fighters (McGregor & Johnson) both training on a Concept2 leading up to UFC 202.

Check out the video below of Anthony Johnson doing some sprints on the Concept2 Model D.

Why Use a Rowing Machine for MMA/UFC?

Rowing machines offer an extremely wide array of benefits that would be difficult to cover in one article. I will try to focus on the benefits most important to a mixed martial artist.

Some of the main benefits consist of building full-body lean muscle, losing weight, increasing cardiovascular capacity, and low-impact on joints.

Rowing machines can also simulate the same cardiovascular and muscular power required during an MMA fight. Basically, fighters can simulate the short burst of energy required in an exchange, while being able to actively recover during breaks in action.

Below I go into detail about all these topics and how they can benefit MMA athletes.

Rowing is considered a full-body functional workout that exercises 86% of the bodies muscles!

Not only will a rowing machine help build these muscles, but it helps build them lean. A key factor for people looking to be as strong, fit, and light as possible.

I wrote an article outlining all the muscles used while rowing that you can read if you choose.

Rowing machines provide such a great full-body functional workout, they were adopted by Crossfit. They are even featured in the “Crossfit Games”, a yearly competition to name the “Fittest on Earth”.

Crossfit only incorporates full-body functional exercises that take your body through a wide-range of motion. So whether you love or hate Crossfit, it does prove rowing machines are an excellent piece of fitness equipment that athletes should be utilizing.

Having good cardio is a staple of any great UFC fighter. How many times do you see a fighter win the first round, only to gas out in the second and lose?

Cardio was a major factor in Conor McGregor’s loss to Nate Diaz at UFC 196. As previously mentioned, he stated “I was inefficient with my energy” and “my gas tank emptied and I could not clear the lactate in my body”.

Exactly the reason McGregor and Dalby introduced the rowing machine to his workouts.

Below are a few reasons why rowing is great for increasing your cardio.

Rowing can be used to train anaerobically or aerobically, which is essential for any sports training.

Aerobic exercise is when the body has the presence of oxygen to fuel muscles. These are typically longer duration at lower intensity.

Anaerobic exercise is when the body has an absence of oxygen to fuel muscles. Muscles must use other resources to power themselves, while producing waste molecules that lead to fatigue. These are typically short duration at high intensity.

All rowing machine data can be measured in real time such as heart rate, pace, and wattage. A huge benefit when taking an analytical approach to training.

Many people think performing anaerobic sprints at 90% max heart rate is the only way to increase cardio. However, many studies show performing 1-hour steady-state exercises at 65% max heart rate will improve cardio in all situations.

Rowing machines are a great tool for helping athletes increase their VO2 max. A key reason Conor McGregor incorporated them into his training.

VO2 max is a measurement of the maximum amount of oxygen an athlete can utilize during a maximum effort exercise. The higher your VO2 max, the better you can perform at high levels in a fight.

While VO2 max is largely genetic, it can be changed by as much as 15% with high intensity interval training. An exercise rowing machines are great at performing. 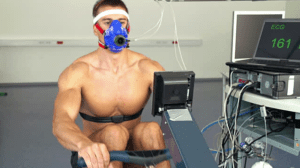 VO2 max can also be tested and measured. A key benefit for fighters who want to measure and improve performance over time.

When you perform at high intensity, like in MMA, your body breaks down glucose for energy and creates lactic acid as a by-product.

To be able to perform at high levels for longer periods, a person must increase their lactic acid threshold.

By training just below or at your threshold, you can begin to improve how long you can perform at high intensities.

Rowing is a great exercise that allows you to control the amount of lactate produced by your muscles and train at your threshold for long periods of time.

HIIT workouts are periods of all out intensity, followed by a short recovery, then repeated for a set number of intervals.

Many times fights consist of short bursts of high cardiovascular and muscular outputs, followed by short breaks. Fighters must be explosive during these high intensity periods and then be able to quickly recover during the breaks.

Rowing allows MMA fighters to simulate this all out burst of full-body movement, then immediately change to an active recovery period.

Seeing that a rowing machine is an excellent full body-workout that is great for cardio, it’s obviously an excellent machine for burning calories and losing weight.

How a person burns calories can be effected by many factors such as basic metabolic rates, types of food you eat, and even temperature.

However, the major contributing factors to burning calories while exercising are age, weight, heart rate, and time. Heart rate and time are the two factors we can control.

Rowing machines are excellent at increasing heart rate and keeping them elevated for long periods of time. 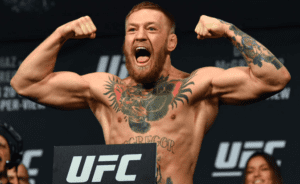 Due to rowing being a full-body exercise that works out 86% of your bodies muscles, it can also increase metabolic rates for hours after you finish exercising.

This means burning more calories throughout the day and losing more weight.

Rowing machines also build lean muscle, which burn more calories than fat throughout the day. So a rowing machine can help you lose weight and keep it off!

Constant training in MMA  can lead to nagging injuries and joint pain. Many fighters train injured and barely give their bodies a chance to recover.

If you aren’t training, your performance is going suffer and your cardio will quickly fade. This is why MMA fighters need a great low-impact exercise to give their joints a rest, while still reaping many of the benefits listed above.

Rowing is a great low impact exercise that has minimal impact on the joints, especially the knees and hips. This is a major benefit over running, where you are constantly pounding the pavement and exerting a ton of pressure on your knees, hips, and ankles.

This is the main reason Conor McGregor switched from running to a rowing machine and bike.

As you can see, a rowing machine is a near perfect piece of exercise equipment for MMA fighters.

A full-body, low-impact workout that is great for cardio and losing weight.

It’s easy to see why a Conor McGregor cardio session usually includes the rowing machine. I’m also happy to see that he believes in them so much he requires it in his training program!

You can also allow me to personally choose a rowing machine for you using my Concierge Service.

I hope you enjoyed my Conor McGregor Rowing Machine article! If you have any questions or videos of MMA fighters using a rowing machine, please post them in the comment section below. 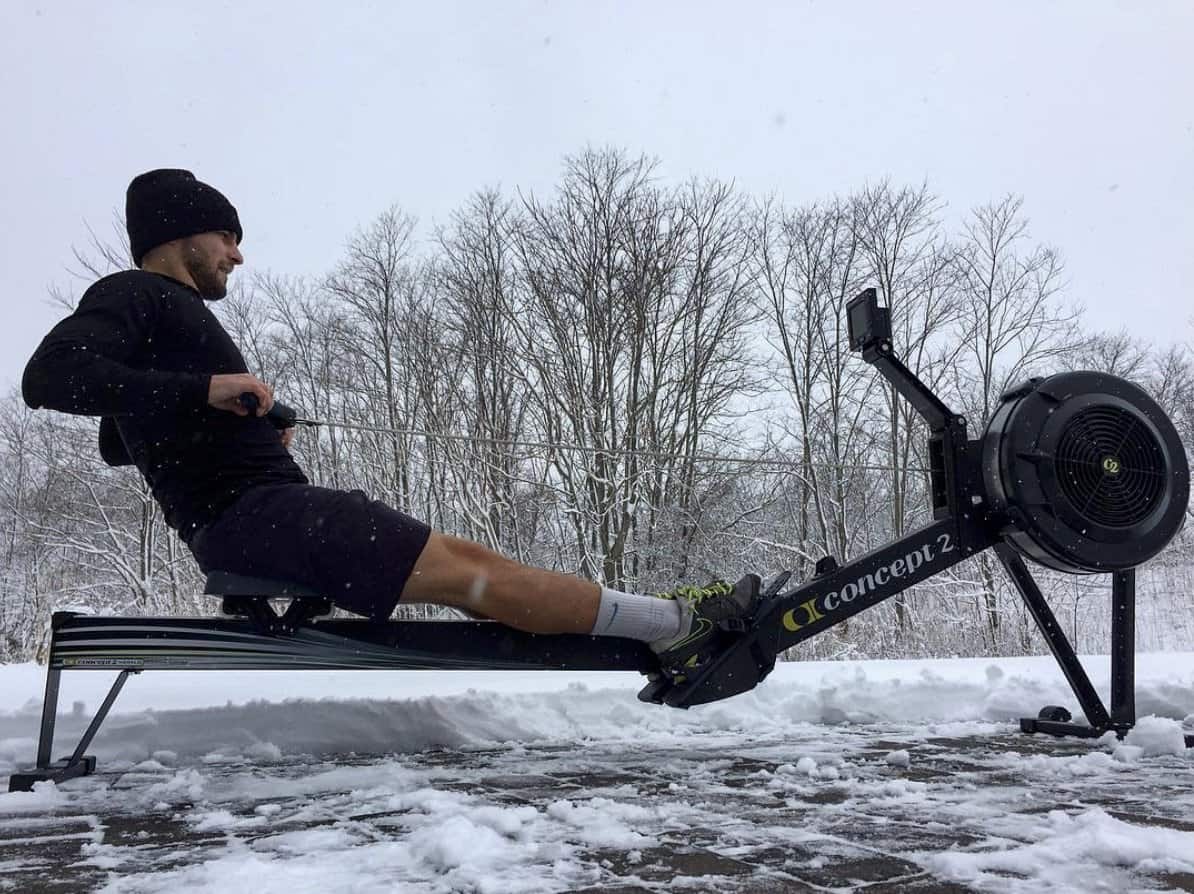